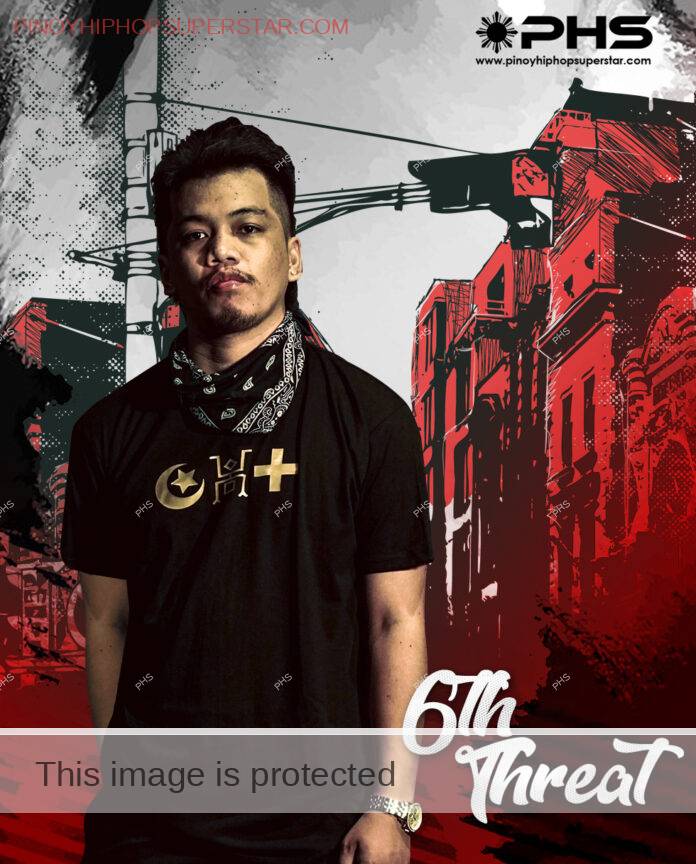 Fluvert Floy Cagampang or simply known as 6th Threat is a rapper, battle emcee, songwriter, and entrepreneur from Davao City. In mid-late 2000 he started rapping, he joined a 5 member group at first that why he came up with the name 6th Threat as he is its 6th member.

He sited that he was inspired by artist such as Eminem, Snoop dogg, Kendrick Lamar, even songwriters like Bruno Mars and Taylor Swift and locally Loonie, Mike Kosa, Kruzzada.

Before he entered Fliptop Battle League, he was also part of Sunugan Battle League. His 1st official Fliptop battle is with Cedie back in 2016. He also battled with notable Pinoy emcees like Lanzeta, LHIPKRAM, Poison 13 and Apekz.

He belongs to a rap group called 3 Digitz with JR Zero and Jai and they sparked this track called “Pilipinong Wack“ subliminally dissing these common autotune dependent rappers and common trap without lyrical content. Then came the diss track exchange with Flow G with tracks Expired and 2G, an interesting beef that captures the audience’s imagination, the exchange makes them more famous and fans became responsive 6th threat proves how a battle emcee handles a beef with intricate rhymes schemes and style. A style that spans more underground artists, He is also articulate to both English and Tagalog language his style became famous that almost every new artist tries to mimic. In Fliptop he is famous for his multi’s and was known as Tirador ng Timog. He also became Isabuhay’s Champion 2019 when he defeated Apekz a battle with 8.6 Million views on youtube. Speaking of views his Fliptop battles always have a million views with a minimum of 1.2M views.

In 2021 he became part of Dongalo wreckords. He also release his first solo music video track “Tirador” that has 1.4 Million views and still counting.

On January 8, 2022, he releases his Thas Business EP in his that has 4 strong tracks.