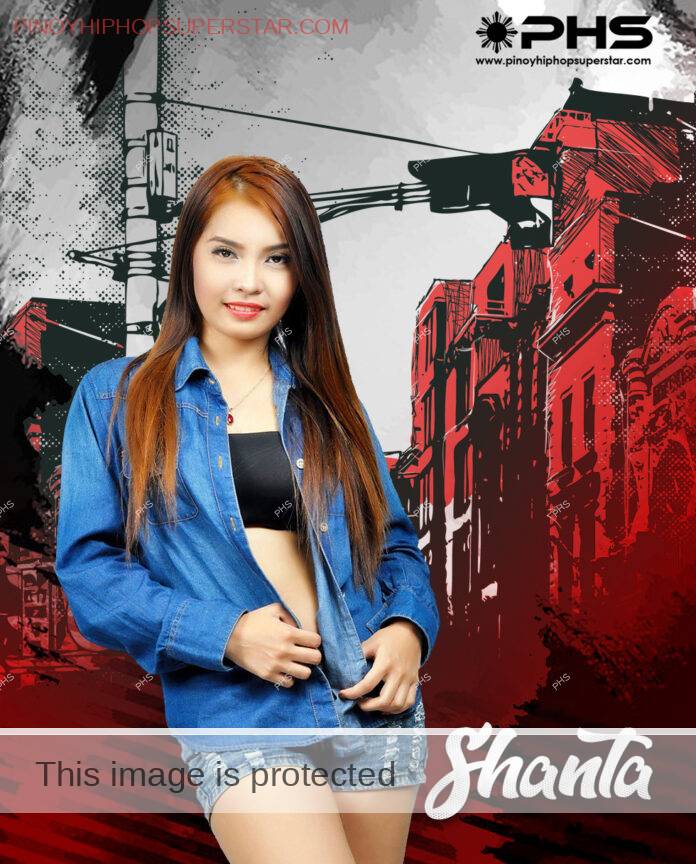 Shanta Raqueil Nale or simply Shanta is a singer, songwriter, rapper from Rizal. She is also a part of FILSCAP (Filipino Society of Composers, Authors, and Publishers) and Brown Squad.

Shanta is graduated with a bachelor’s degree in Travel Management from Our Lady of Fatima University at the same time she is starting her early career as a singer joining contests and events and was supported by her parents, sometimes she even reviewing her lesson during backstage just to maximize her time. This experience earns her projects such as mall tours, radio guestings, performing on corporate events, during her early years he and a part of NDM (Niel de mesa) Singers a collective of artists that not only can sing but also have IT factor. In 2015 they (NDM Singers) joined and won Aliw Awards “Best New Artist Group” because of this the group was able to have a concert of their own and able to perform in different places such as Sta Lucia East Grand mall and the City of Dreams. After almost a year of being active, the group disbanded.

Her experience on stage enabled her to get connected to some local rap artist until she was accidentally doing a collaboration with Aikee on the 4-year anniversary of Pinas FM. In 2015 she meet Delicado Uno at some local event in which she was later invited to be a part of a group called “Araw Araw Sunday” an accidental group so that they can join a Rap Contest on Showtime which they luckily became a finalist who with controversy almost won. They also joined “Wowowin” which was later renamed the group “Brownsquad” due to their TBS roots.

Due to this experience her inner love of hip-hop grew, she usually admires the likes of Katy Perry and Beyonce, but now finds fondness for the likes of Snow the Product and Dr. Dre.

Her connection to hip-hop makes her receive tons of collaboration request, she finds it fascinating that she was able to collab with some artist she look up to when she was in high school especially the likes of Aikee, Jay Slim, Curse one, and later some rap pioneer such as Anak ni Bakuko. But her success and connection to hip-hop were not received well by her parents.

In April 2022 she also takes part in TV 5′ Lunch out Loud’s Makata Celebrity Edition” where she was dubbed as “Sexy Rapper” which she won, and also regains the support of her parents.

She also takes part in Karaoke World Championship Philippines in 2017 in which she became a grand finalist. She was able to perform in Wish Bus twice, She also has upcoming collaboration tracks with artists such as Tuglax, and Jo Hussle to name a few with a track called “Sindikato All-Star” and an untitled track with OG Sagisag.

As of late Shanta is studying piano to add more to her repertoire, currently, she is a Licensed Property Specialist in a high-end real estate company with an option to work in Cebu pacific as a flight attendant as well, making her career trajectory quite uncertain but due to her early success, her focus unlike any other is switching on her future goals, and although can’t argue we are always willing to welcome her back.