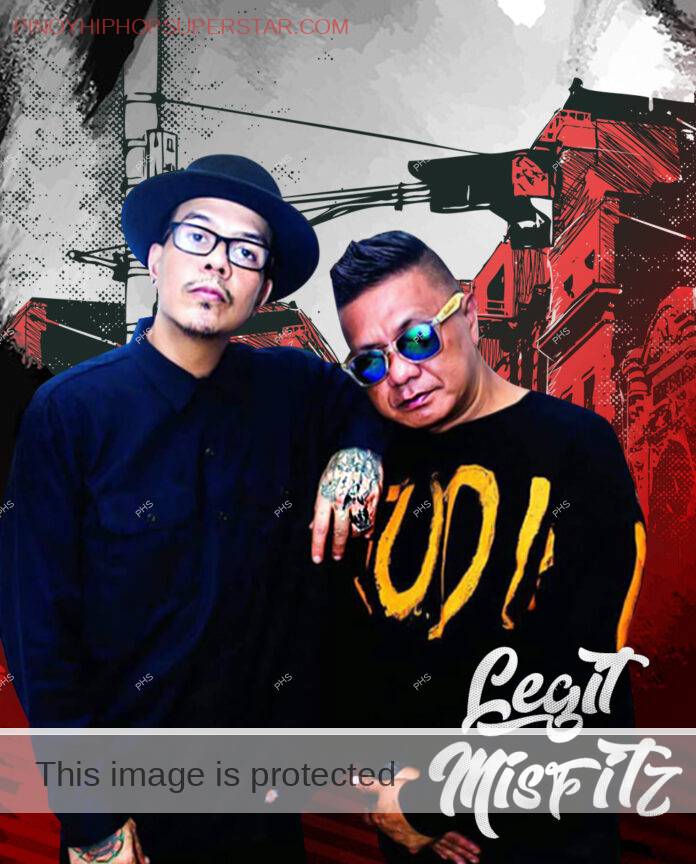 Way back in 1993 when it comes to rap groups Mastaplann & Death Threat were the ones who were dominating the Airwaves. In 1994 a Rap group that goes by the name of Legit Misfitz emerged and became a competition to those two group that came before them…

Spearheaded by Boom (of Kulay), Legit Mizfitz is composed of Dash & Jhego (former dancer of Boom), they’re known for their Masa/Party Type of rap. Their debut album “Sons of Fliphop” was released in 1994 with the tracks “Jabongga”, “Trapik” & “Air Tsinelas” which became instant hits… and marked another landmark in the history of local hip-hop/rap… The 1st Album went Gold selling 40,000 copies during that year and was nominated a couple of times for best rap album and single for Awit and Katha Awards from 1005 to 1996.

Two years after they released their sophomore album “Ekis Pinoy(Bahala Na Generation)” with “Lotto” & “Chamama” as singles that also became instant hits with live band element featuring some of the best including the Dawn guitarist Francis Brew and other great artists on this album.

1997 was the year when the “Balik Sa Lumang Eskwela” album was released, unfortunately, the album is not as successful compared to their previous albums but 1st featured its Posse track called Vibestation Vol.1 which was the trend of 10 min tracks for an All-Star track featuring Jhonny Krush of Masta Plann Jeff Tam of Chinese Mafia Marben of Metal GroupoBad Burn and Sun Valley Crew just to name a few.

Fast Forward to 2002..5 years since their last album. Legit Misfitz came back with a brand new album “100 Porsyento”. and with the track “Magasin” which is a revival of Eraserheads Hit song as the carrier single. Plus they guested artists from other camps. This album can be considered more focused than their previous ones. The Album tritle track “100 Porsyento” features Dash’s sister Famous actress iza Calzado before she entered showbiz

Eventually, the 2 rappers carried on with their own endeavors, Jhego released 2 solo albums with his Felix Bakat project, and Dash with his own projects, ESP and Beatmathics, and 2 Solo albums as well.

Dash also produced for other artists most recently with the IceOut compilation under his Beats of the Northstar Production. prior to these releases they ave done work doing Hypemen MCs in numerous clubs and hosted events as well. Dash entered Radion in 2004 with Magic 89.9 and in 2007 to 2020 with Wave 89.1 FM.

In 2019 they were awarded the 1st Calle Con 2019 Pinoy Hip-hop Hall of Fame awards along with Pinoy Rap King Andrew E, DJ M.O.D, Chinese Mafia, and Mike Swift just to name a few.

Now they’ve ventured into pushing their own indie label PHUNKY JUAN ENTERTAINMENT and have been working with unsigned and up-and-coming artists recently they part of a project under Def Jam Philippines “Recognized 2.0” with a track that Dash Produced and features Legit Misfiz, k247, Calvin de Leon, and the sensational Al James entitled “Atin Ang Gabi”

This year Legit Misfitz is working on a trilogy album to commemorate their 30th anniversary this 2024, to kick things off this year is the first EP entitled “Legit As Phunk” with 8 tracks and 3 Singles ready to release with 2 music videos to boot. They will take you back in time Misfitz style!

Boombap Partyyeats that Golden Era Flava when on stage they remind you of ONYX with RUN DMC Twist to it.