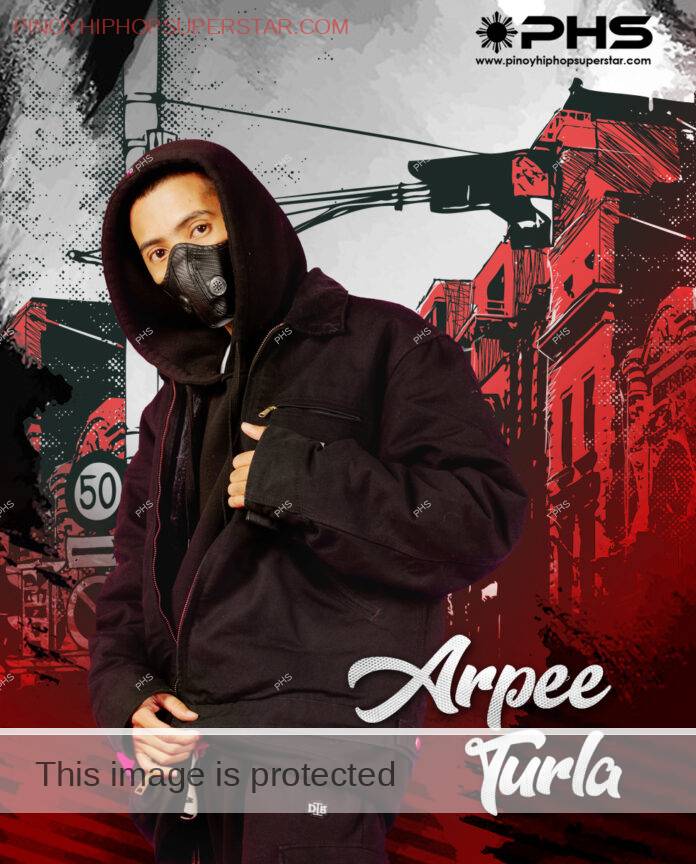 Arpee Turla is a rapper, creative director, drone pilot, executive producer, and entrepreneur, and was locally raised in Baclaran 1702. Founder of Bac Area Music also known today as DTTS and member of the group 727 Clique.

Arpee started as a fan of Hip-hop way back during his elementary days in Pampanga (moved there temporarily) it was the first time he heard “Without Me” by Eminem and “Stupid Luv” by Salbakuta, during those time he has no clue that it was hip-hop/rap that he’s listening. He also became a fan of other music genres well especially those boyband eras wherein he even buy tape, posters, and even song hits to memorize their songs.

After he graduate they moved back to Baclaran, he remember his dad bought a CD player
there’s a certain CD he can’t forget because he love the melody of that track
and that track happens to be “HOME” by Bone Thugs and Harmony,
from there his love and interest to hip-hop grow fondly,
until a friend Jalil introduces him to Tupac & Outlawz.

A friend also introduce him to Khen Magat he became an instant fan because his correlation to Gloc-9, he even meet Khen Magat and purchase his CD, his keenness inspired him to try Rapping.

It was a childhood friend Benjie who brought him to Bayanan “Muntinlupa Style” wherein he experience his first recording then the rest is history until he listen to Abaddon & Inozent 1 (Caloocan to Malabon), My Game of Mike Kosa & Apat na alas with Thirdflo. Until he tapped in with J-Will in Bosingkit Records from there he became more of a fan of 187 Mobstaz.

In 2008 where he meet Thirdflo because he purchase “Isang Bagsak Mixtape” and “Musika’t Diskarte” In 2015,
his dedication and interest in music became the door for him to be part of 727 Clique
bringing us to hit tracks such as “Trabaho Lang”, “Family Day”, “Nagbabawi”, “Ating Panahon”, “Tropa” and others.

In 2009 he tried to persuade his friends to create a group BacMob/Ceasefire Production, where in they used to join rap contests, it was in 2010 was he changed it to “Bac Area Music – Dedicated to the Streets” during this time where we found his purpose in music. It was also a time were the street wars (Gang Related) are on its peak. Then they created a compilation project called “Isang Pangarap”, which included artists from Baclaran and other nearest artists. It introduces collaborations and camaraderie. It was a project that became a reason for unity.

In 2012, Bac Area movement became more solid when Arpee was get connected with a street legend that later became his Street Mentor Kuya Arcee aka Dize One, he trusted him and invested in recording equipment to be able to produce quality music. He became grateful because they (Ceasefire|Silent Records) with poor man’s equipment,
a mic stick, headphones with stockings, etc.  It was also a time when OG Kaybee moved in to Baclaran, OG witness his movements, including the music and clothing business he was also the bridge that connects Arpee to 187 Mobstaz that started in a simple collab that became more as time goes by.

December 25, 2018 he rebranded Bac Area to Dedicated to the Streets (DTTS).
The Vision is to bridge the gap, to help more starving artist grow not just in Baclaran but in the different hoods During this time, his passion grew, and he became goal-oriented.
His experience thought him a lot of things that became useful to him and to the artist inside DTTS.

His upbringing makes him familiar with the retail business since it was the business in the family. His parents sell different clothes in Baclaran. In 2010, when he first saw a music video titled “Hussle in the House”, it sparked the idea to start a clothing line business. Now with a goal in mind, a clothing line to promote, a place to represent and music to spread, he’s enjoying the fruit of his labor through DTTS|MSPH Enterprise