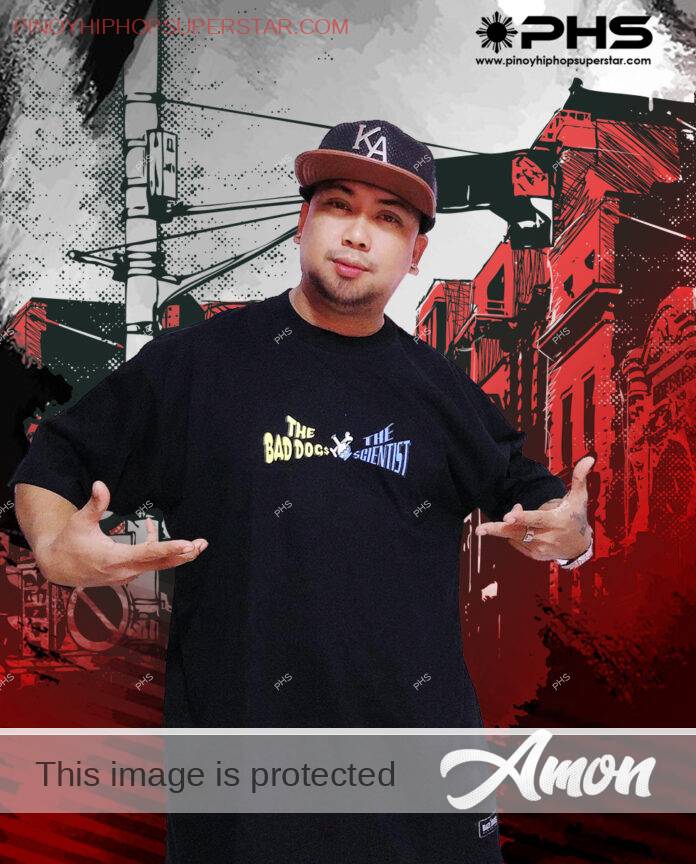 Amon started rapping in 1997, he became a member of OPG (Original Pinoy Gangsters), and later he created Malolos Pinoy Gangsters with experience with groups he also create one of the most respected groups in Bulacan the BFPro (Bulacan’s Finest Production), in the year 2000 Amon and the BFPRo became a part of Dongalo Wreckords. Inside the DW camps were Amon and Crazzy G became close friends and when Crazzy G moved to Pampanga Amon tells him that he should create another version of BFPro in Pampanga and later it became the PFPro (Pampanga’s Finest Production)

in his early days, Amon was actually a PUNK (Punks Not Dead) the mortal enemy of Hip-hop way back, he was a part of a group named Trouble Maker (TM) in this stage, he was actually a bit difficult, a self-professed delinquent they believed “Bawal ang hip-hop sa Malolos” he also has some encounters with people who love Hip-hop, those encounters are usually involved fights.  Yet in some weird coincidence, he became influenced to like it, even to the extent that he influence other PUNK friends to become Hip-hop as well.

Amon’s BFPro actually has 583 members and 300 active ones from Bulacan, making him one of the most respected artists not only in Bulacan but in the underground scene. During its (BFPro) early years they had some altercation with a rap group Republican Syndicate, they have some exchange of diss tracks, but those are history now and already squashed.

Later in his career, Amon produces hip-hop events across Malolos Bulacan, and became well connected and respected, even public servants recognized his contributions to the community. He was also able to create an event for the most recognized Pinoy Rap artist in the Philippines, Andrew E in Bulacan, as well as for other acts as well including Slapshock.

As of the moment, Amon is well recognized in the hip-hop community. He is now focused on creating events to help build new artists. He also has a plan to release more new tracks soon.

A rough and rocky start and it teaches Amon experiences and knowledge. Now, he is more focused and mature, enjoying the fruits of his labor.