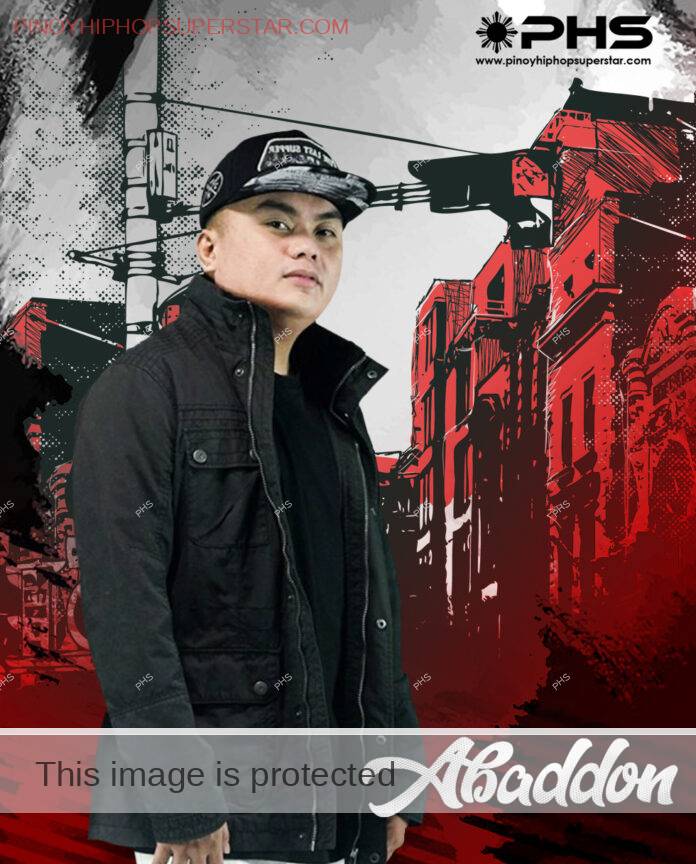 Venzon Odulio Malubay also known as “Abaddon” was born on 13th of October 1985 at the municipality of Navotas and raised his childhood at the city of Malabon.
A typical boy and as a member of a simple family, home, school, play and friends is the nature and explored the world without father supervision resulting of having a bit of hard-headed attitude in his first 12 of years.
By his mother guidance, Abaddon take up high school and college education, learned a lot of things, founded his personality and also discovered his talent in making music and invested his time, money, effort, love, and life in this industry and culture so-called “RAP”.
Way back late 90’s,he started listening and loved rap music. After a couple of years of listening in to it, Abaddon tried to make some of it with his first co-rappers, sad to say he doesn’t succeed.
2003, the year Abaddon meets “Huddasss”(member of the rap group “Respetadong Hudas” and his first mentor), Huddasss included Abaddon in their group with “Playaz” and started working out together from the underground rap scenes like contests, battles, and competitions. Abaddon’s First screen name was “Ang-hell” which means “Ang impyerno“. But after sometimes, Abaddon learned the bible verse “Revelation 9:11”
and it’s all about Abaddon. He finds it interesting and unique that’s why he named himself from Ang-hell to Abaddon and formally announced his self as a “Rapper”.:)
Respetadong Hudas (Abaddon, Huddasss and Playaz) joined the production of “187 Mobstaz entertainment” under Mr.Gab “Enzayne one” Malupit and started recording their music, making collaborations and building friendships with co-rappers under 187 mobstaz.
Time passed by, Abaddon produced some mixtapes titled “Batang Malabon“, “twistero“,”respetadong hudas (the album)” and “C.M.T. Connection (with Kial and Inocent one)”.He also accomplished many rap projects under 187 mobstaz, a lot of collaboration with co-rappers, featured in many rap songs with other rap groups all over the Philippines and some countries.
From C.M.T. Connection, with Kial and Inocent one, They expanded their group by adding 5 members named “Crazymix, Flict-g, Tuglaks, Smugglaz and Numherus” and they changed the group name into “SHOCKRA (shockin’Rapgame)“also known as “Walong Sumpa”.He’s also a 1st batch rap artist of “Blindrhyme
production” under Mr.Denmark “Darmo Kandado” Repuyan (One of the Phillipine’s hip hop/rap legends).
2010, Abaddon formally joined the rap group “Malabon thugs (Tuglaks, Sparo and Kraysiz)” with Huddasss and his brother J-twist intending and focused on making a name in their own city and in the philippine rap industry by means of their own music. Also, The dream of having his own home recording studio comes to life by the help of Mr Anthony “Lux breezy” Ching of Breezy boys and he named it “T.H.U.G.S. Music
(The Highest Unda’Ground Skills)”.
By now, Abaddon still continuing to make rap music, doing projects for those people who support him, helping many rappers by means of renting his studio, building good names, giving a part in the industry by producing rap events with the help of his co-rappers and groupmates who believes him.
Recently, Abaddon make his own production that was mainly based on producing great rap artists, good music, and a must-see event and he called it “THUGSZILLA Production(Thug till’ i die)”. By putting his whole attention into it and even though nobody knows what’s next, he’s hoping that “one day will come and everything will gonna be alright”.
His long career includes being the father of Bahay Katay Tournament, lately, he became more active he collaborated with so many well-known rap artists, produce so many hit tracks, the Super Rap Group “SHOCKRA” made comeback as well, he is well respected by his peers and fans, He is also the owner of his self produce clothing line RARE